Built at the foothills of Troodos Mountains, Limassol is the second largest city of Cyprus, located on Akrotiri Bay, on the island’s southern coast. It is the island’s main port, the biggest port in the Mediterranean transit trade and an excellent base for companies doing business with the Middle East, Africa and Eastern Europe.

Limassol was built between the ancient cities of Amathus and Kourion (Curium). Its’ first inhabitants were transferred to Limassol from Amathus after Richard the Lionheart destroyed Amathus in 1191, when Isaac Comnenus, the Byzantine governor of Cyprus, refused to contribute to Richard’s crusade for the liberation of the Holy land. Originally the city was known as Neapolis (new town).
Economy

Tourism is a large sector of the city’s economy. The development of tourism began after the 1974, Turkish invasion when the Limassol became the host of the principal tourist resorts of the island. Limassol appeals to a wide range of tourists, from those interested in sun and sandy beaches, to those who prefer to explore Cyprus’s culture and traditions at Limassol’s folk museums and sites of archaeological interest, or even those who want to participate in one of the popular festivals for which the city is famous. Limassol offers a lively nightlife and a plethora of cafes and bars that line the bustling Limassol seafront. Accommodation options range from villas, to self-catering apartments to luxurious hotels.

The city serves as a base for many of the island's wine companies. Big quantities of the wines which are produced by the grapes that grow on the slops of Troodos mountains, are exported to Europe; they are of excellent quality and have won several awards in international exhibitions.

There are about 350 industrial units with 90 industry wares in Limassol and include dressmaking, furniture, shoes, drinks, food, prints, metal industry, electric devices, plastic wares, as well as many other industries. Located between Nicosia to the north, Larnaka to the east and Paphos to the west, the city is an important trade centre; most of the trade markets are gathered in the center of the town and in the tourist area along the coast. Most of the hotels, restaurants, confectioneries, discos and places of entertainment in general, are found in this area.

Limassol became the major sea port of the island in 1974, following the occupation of Famagusta by the Turkish invaders. Limassol has two ports. The old harbour can accommodate three small ships at a time and is mostly used by fishing boats. The new port has a greater commercial and passenger flow of traffic and can accommodate ten ships at a time, depending on their size. Exports of grapes, wines, carobs, citrus fruits, as well as imports of cereals, vehicles, machines, textiles, agricultural medicines, fertilizers, iron etc. are exported and imported through Limassol’s new port.

Work on the building of a new marina has begun and will be completed by 2011. The new marina, which will hold 1.000 vessels and will provide dining, accommodation and business conference facilities, is located between the old and new ports and it will introduce a new feature of tourism for Cyprus.

Athanasiou specializes in properties for sale in Limassol.
Find yourself your unique apartment in Limassol.

Medieval Castle: The medieval castle is one of the nine castles of Cyprus (the others are those of Kolossi, the castles of Larnaca, Paphos and Famagusta, the castles of Kantara, Buffavento and St. Hilarion and the castle of Kyrenia). It was built by the Byzantines around 1000 AD and Richard the Lionheart is supposed to have married here Princess Berengaria of Navarre after her ship was grounded nearby in 1191 due to a storm, while she was on her way to the Holy Land where she was accompaning Richard on his Third Crusade. Between 1790 and 1940, the Castle was used as a prison. Today the castle serves as a medieval museum and houses a collection of artifacts covering the period from 400 to 1870 A.D. A visitor can see exhibits of cannons, wood carvings of the 17th and 18th century, paintings and tombstones, statues, suits of armour, coins, terracotta, metalware and pottery, glass and marble articrafts. 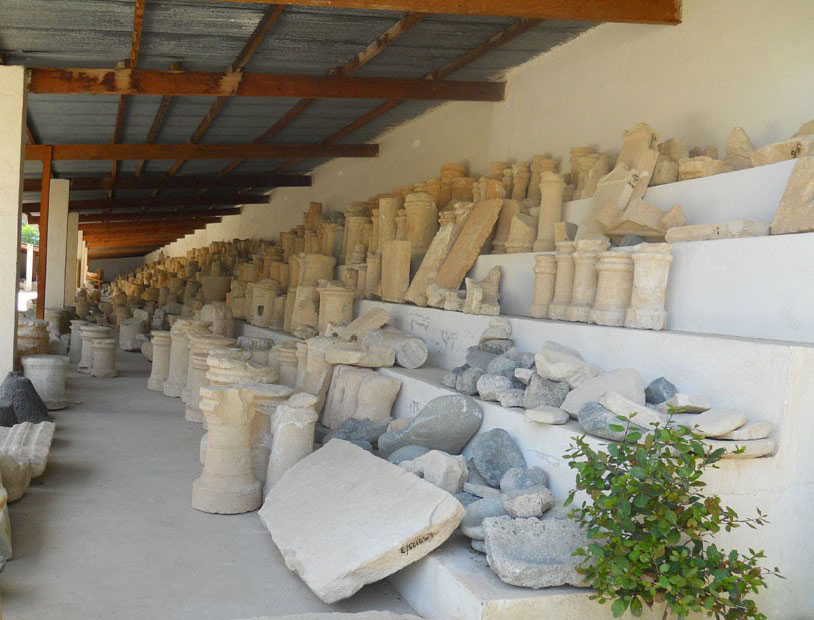 The collection includes stone axes of the Neolithic and Chalcolithic period, pottery and objects from the ancient cities of Curium and Amathus, as well as Roman terracottas, gold jewellery, coins, sculptures, columns, vases, earrings, rings, necklaces, marble statues and other antiquities found in the district of Limassol.

Folk Art Museum: the Folk Art Museum is a beautifully preserved old house of six rooms and houses a collection of more than 500 exhibits of Cypriot Folk Art of the last two centuries.

Among the intriguing objects of the collection are national costumes, tapestry, embroidery, wooden chests, waistcoats, men’s jackets, necklaces, a variety of light clothes, town costumes and country tools. The museum was established in 1985, and it was awarded the Europa Nostra prize in 1989.

Public Garden: the Limassol Public Garden is a green oasis of eucalyptus, pine and cypresses trees situated on the coastal road. Inside the garden there is a small zoo, a small natural history museum and an open theatre where music events are held during the summer.

Twin Cities Park: situated on the waterfront, not far from the Public Garden, the one mile long park is home to a series of sculptures commissioned by the Limassol Municipality and created by Cypriot, Greek, German, Israeli and Egyptian sculptors.
A site that should not be missed when visiting Limassol is Ancient Kurion, one of the most magnificent archaeological sites on the island. The House of Eustolios consists of a complex of baths and a number of rooms with fascinating 5th century A.D. mosaic floors. The 2nd century B.C. magnificent Greco-Roman Theatre of Kurion overlooks the bay of Episkopi and is used today for musical and theatrical performances. Equally magnificent is the Sanctuary of Apollo Hylates, God of woodland and protector of Kurion, who was worshiped at the Sanctuary from the 8th century B.C. to the 4th century A.D. Another popular site to visit is the Castle of Kolossi, the headquarters of the Knights of the Order of St. John, where according to tradition Richard the Lion-heart and Queen Berengaria spent their honeymoon.

Find yourself your unique villa in Limassol

Limassol Carnival: Limassol is famous for its Carnival which has its origins in ancient pagan celebrations. The ten day long Limassol Carnival takes place during the end of February and begins with the entrance of the King Carnavalus (King of the Carnival) into the city, followed by the children’s parade.

During the carnival parade in the main city streets, large crowds from all over the island gather to watch the floats and other masqueraded groups. Many parties take place every night all over the city which fills with serenades and masqueraders.

Wine Festival: The Wine Festival is a revival of the ancient celebrations in honour of Dionysus, the god of wine, and Aphrodite, the goddess of beauty and love. With the theme 'Drink wine, it gives you life', the festival takes place in the Limassol Municipal Garden during the first week in September. The festival lasts 10 days and attracts Cypriots from across the island, as well as many visitors who have the opportunity to taste some of the best wines of Cyprus free of charge and to enjoy folk dancing and music performed by various local and international groups.

In 2003 Limassol introduced also the first Beer Festival , an annual three days long dance event by the sea,  in the heart of the city centre. Visitors can enjoy a variety of Cypriot and imported beers and a mix of international music.
Lemesia: Lemesia is a ten days long international sporting event, held during mid-late October. Athletes from several countries compete in boxing, karate, thiathlon, marathon, shooting, rhythmic gymnastics and cycling.
Other popular annual festivals include the Yermasogeia Flower Festival in May, the Festival of the Flood in June, the Shakespearean Nights and the Festival of Ancient Greek Drama in the summer.

Find yourself your unique house in Limassol

Limassol has two major sport clubs which have football, basketball and volleyball teams, as well as teams in athletics, bowling and cycling.

Limassol has a professional handball team and a Rugby team and hosts the Cyprus Rally for World Rally Championship, as well as an annual marathon event.

Limassol has a festive atmosphere all year round. Despite their urban busy lives, locals love spending time in the outdoors coffee shops, strolling along the promenade and eating dinner with family and friends on the patios of the many taverns and restaurants found along the waterfront.

The city is known as the ‘town of revelry’, so when it comes to nighlife, Limassol lives up to its reputation; it has something for everyone. There is a plethora of bars, pubs and clubs, most of them along the tourist strip, where one can watch sports on big TV screens, listen to local or international music, dance or just relax.
Climate

Limassol has a Mediterranean climate with long, hot and dry summers which begin in mid May and end in mid October. The winters are rainy with thunderstorms and begin in December and last until March. The springs and autumns in between are short and mild; sometimes during the spring, dust blows from the Sahara desert and affects visibility.

The city has a population of 228,000 (2008 census). Traditionally, Limassol had a mixed population of Greek and Turkish Cypriots. Following the Turkish invasion, in 1974 the majority of Turkish Cypriots moved to the north, and accordingly, many Greek Cypriots from the north of Cyprus, who became refugees, settled in Limassol. During the 1990s several Turkish Cypriots returned from the North of the island to the Turkish quarter of Limassol. The arrival of other nationals (most of the new arrivals come from Eastern Europe and in smaller numbers from Africa, the Middle East and South and South East Asia) in the last 2 decades has increased the city’s population significantly. Greater Limassol today includes the municipalities of Limassol  Polemidia, Mesa Geitonia, Agios Athanasios and Germasogeia.

Greek and English are widely spoken and Russian is becoming increasingly popular due to the large Russian community of Limassol, the increasing numbers of Russian Tourists and the numerous Russian companies that operate in the Limassol area.

We use cookies to analyse our traffic. We also share info about your use of our site with our analytics partners who may combine it with other info you’ve provided to them or they’ve collected from your use of their services. View Policy
I Agree